Study the entries in the following table and rewrite them putting the connected items in a single row. 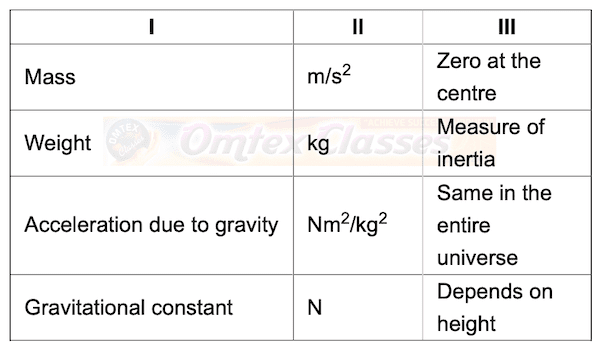 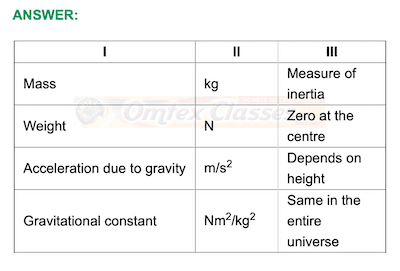 a. Difference between mass and weight of an object is as follows:
The mass of an object on the Earth will be same as that on Mars but its weight on both the planets will be different. This is because the weight (W) of an object at a place depends on the acceleration due to gravity of that place i.e.

(i) A body is said to be under free fall when no other force except the force of gravity is acting on it.
(ii) The acceleration with which an object moves towards the centre of Earth during its free fall is called acceleration due to gravity. It is denoted by the letter ‘g’. It is a constant for every object falling on Earth’s surface.
(iii) The minimum velocity required to project an object to escape from the Earth's gravitational pull is known as escape velocity. It is given as:

(iv) The force required to keep an object under circular motion is known as centripetal force. This force always acts towards the centre of the circular path.
c.  Write the three laws given by Kepler. How did they help Newton to arrive at the inverse square law of gravity?

where, m is the mass of the particle, r is the radius of the circular path of the particle and v is the velocity of the particle. Newton used this formula to determine the force acting on a planet revolving around the Sun. Since the mass m of a planet is constant, equation (i) can be written as:

Now, if the planet takes time T to complete one revolution around the Sun, then its velocity v is given as:

where, r is the radius of the circular orbit of the planet.
Or, we can write it as,

[as the factor 2π is a constant]
On squaring both sides of this equation, we get:

On multiplying and dividing the right-hand side of this relation by r, we get:

According to Kepler’s third law of planetary motion, the factor

On using equation (vii) in equation (ii), we get:

Hence, the gravitational force between the sun and a planet is inversely proportional to the square of the distance between them.
d. A stone thrown vertically upwards with an initial velocity u reaches a height ‘h’ before coming down. Show that the time taken to go up is the same as the time taken to come down.

For vertical upward motion of the stone:
S = h
u = u
v = 0
a = -g
Let t be the time taken by the ball to reach height h. Thus, using second equation of motion, we have

For vertical downward motion of the stone:
S = h
u = 0
a = g
Let v' be the velocity of the ball with which it hits the ground.
Let t' be the time taken by the ball to reach the ground. Thus, using the second equation of motion, we have

Hence, from (i) and (ii), we observe that the time taken by the stone to go up is the same as the time taken by it to come down.
e. If the value of g suddenly becomes twice its value, it will become two times more difficult to pull a heavy object along the floor. Why?

Explain why the value of g is zero at the centre of the earth. 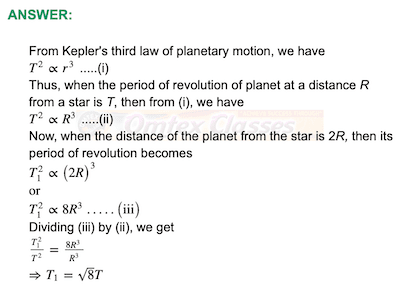 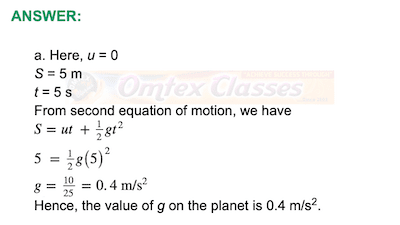 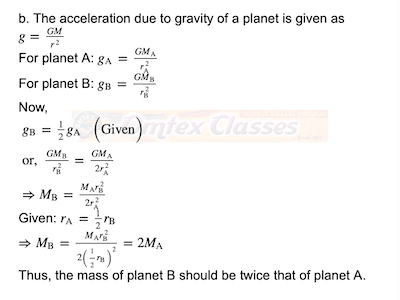 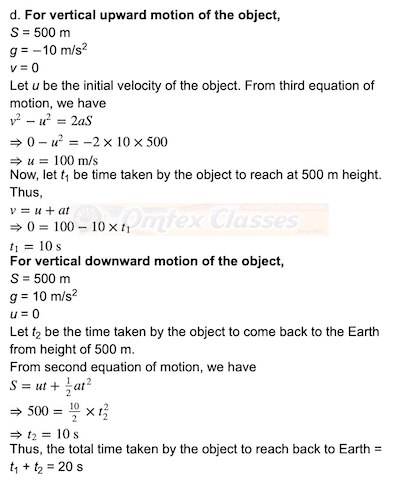 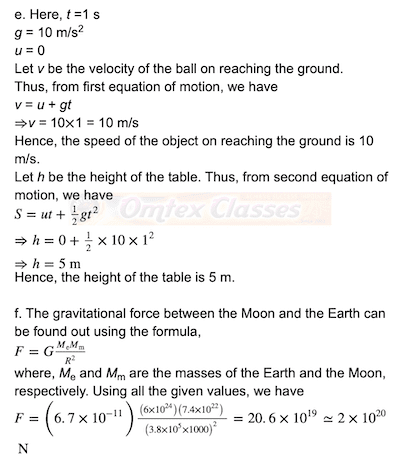